A mind blowing mentalist collides with an ALL NEW thrilling film-noir adventure. This hilarious psychic detective puts on a killer show… literally.

ABOUT THE ARTIST: Tim Motley’s been performing professionally for 20 years as a comedian, a mentalist, a magician, an actor, a radio host, and a variety performer. He is most well known to Fringe Festival patrons from his hit shows 2 Ruby Knockers, 1 Jaded Dick, and Dirk Darrow: NCSSI. Both have toured the world many times, and garnered many outstanding reviews and awards. He has created 8 different shows to date, and has performed in 42 countries. He has also had many television appearances, and has been a radio DJ for RRR Melbourne and URE England. Tim now lives in Melbourne, Australia. 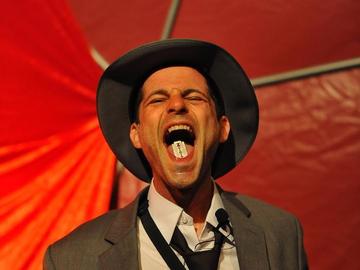 FRINGE TAGS REQUIRED for admission to all ticketed performances (it's a one time $5 purchase to support the continuation of the fringe).

100% of all ticket sales are returned to artists