SHOW DESCRIPTION:
From the writers and producers that brought you the award-winning production of The Phantom of the Empire  –  Into the Walker Woods is the clever new mash-up of Stephen Sondheim’s prolific musical, Into the Woods and TV’s #1 TV Show, The Walking Dead! Awarded Outstanding Ensemble at the 2017 San Diego International Fringe Festival, the show features songs such as “Sanity, Suffering, Gore”, “There Are Walkers All Around”, and “Hello, Zombie Girl”. We’re slapping five and a half seasons into an hour long musical, so come prepared for lurching zombies, gratuitous southern accents, and a whole lot of death! We may be going “into the woods”, but we aren’t going to granny’s…

The Phantom of the Empire is the award-winning epic mash-up of the ORIGINAL STAR WARS TRILOGY told through the haunting music of THE PHANTOM OF THE OPERA. Featuring songs such as "Rescue Me", "We Can't Aim", and "I'm Not Nagging You", critics and audiences agree that this show is a can't miss! So grab your lightsaber and meet us at the Opera House!
You are buying a DOUBLE FEATURE TICKET. If you wish to only see one of the shows, please click here for INTO THE WALKER WOODS, or here for THE PHANTOM OF THE EMPIRE. *Double-feature tickets do not include matinee show times. 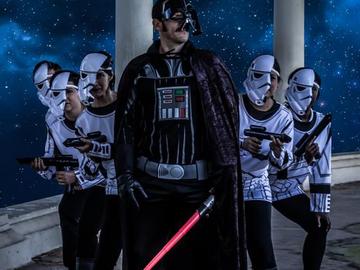